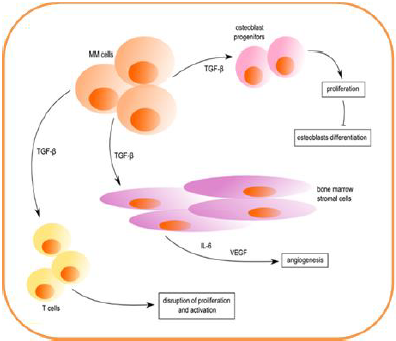 Background: The expansion of Multiple myeloma cells (MM) is regulated by cellular cytokines, including TGFβ1, which is suggested recently as the main growth factor. It was the purpose of this study to determine serum TGFβ1 levels in MM patients and to seek a correlation with tumor stages.

Materials and Methods: This comparative case-control study involved 55 MM patients, which were diagnosed by specialist hematologists. The treated group included (26 stages II and 16 stages III), and the newly diagnosed MM group included (6 stages II and 7 stages III), as well as 25 healthy individuals as controls. The measurements of TGFβ1 were done by a specific ELISA kit. SPSS was the software applied for statistical analysis. ROC curve was tested to predict MM patients from the healthy subjects, and stage II from stage III, with a p-value < 0.05% as significant.